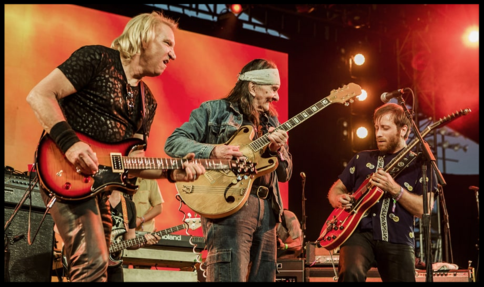 This Pre-release Note would be incomplete if it failed to mention that this project honors the contributions of Brett Hill, Randy Markko and Tom Miller - not only to the music, but to our lives. In the end, they spent themselves for something that mattered, something that outlived them, something that will outlive us all, the music and the Message.

Dan knew what we’ve long known, that much of Glenn’s best guitar work is on the ASFB recordings. A member of the James Gang and PG&E for a total of 3 years, critics at large dismissed his 10 years with ASFB, relegating his work to obscurity. As Dan told me, “You guys were the fore-runners of an entire genre and nobody knows about it.”

So, his call started me thinking; regardless of the energy source sparking the notion, “maybe the time is right.” Knowing that the 50th Anniversary of the band’s genesis coincides with what is arguably the birth of Contemporary Christian Music, it all comes down to, “The Flowers of Time.”

Searching for a theme around which to build the new packaging for the project, images of four Stained-glass windows from Churches and Cathedrals around the world were selected. Making the Anniversary release instantly recognizable, they also forward the band’s lyrical focus on Spiritual loss [My Poor Generation], Regeneration [Brainwashed], Spiritual growth [For Christians, Elves and Lovers] and Service [The Sower].

Liner notes are a compilation of quotes from book authors, journalists, DJs and critics from publications as diverse as The Guardian of London, Billboard, Slate, Wired and the old, Harmony magazines. Re-masters of the four albums were produced by Lava Room Recording in Beachwood, Ohio. The release date of September 4, 2018, marked 50 years, exactly, since the first songs were written.

Dan Auerbach, Ohio musician and guitarist for Grammy Award winners, the Black Keys, called me sometime in May, 2016 having just finished recording an album at his Nashville Studio with Joe Walsh and Glenn Schwartz.

The purpose of his call was to encourage me to release the four albums recorded by the All Saved Freak Band. Dan is a lifelong Glenn Schwartz fan, travelling often, during his early teens, to hang his nose on the front of the stage wherever Glenn played. “He changed my entire approach to music.”